Showing posts from August, 2006
Show All

By Springy - August 29, 2006
After my diabolical update yesterday I thought I better do another one since it was so bad. So first bit of news that I am going to talk about is something that's gonna change the world, something that everyone has been hoping for. What is it I hear you cry, well, it is FREE MUSIC DOWNLOAD. A service called, SpiralFrog will launch in December and will offer free music to anyone, which is provided by nice multi-national companies that will advertise on the service. How nice of them to do that... lol.. See a great reason why advertising is great!!! lol.. you get free stuff but also may get spyware :( ... lol. Anyway, SpiralFrog will offer bands from U2, erm.. well anyone who is on the Universal label. I just hope that more record companies follow suit, lol...

Now on to sad theme. The oldest person in the world died today. Maria Esther, from Ecuador passed away hopefully peacefully, after reaching an impressive age of 116 years old. Before she died, she was repeating the words, "I want to be young again" and at times called to a dead daughter, asking her "to come, take me with you". You never know, she might have been in a place where she was half way between the afterlife and our life and may have thought that she could see her daughter. Anyway, she has died now. I only wish I could live that long... actually on second thoughts no! lol.

Anyway... I think that will be sufficient for today's entry, but I leave you with something my cousin, Shelly sent me. It is a joke story thingy. Actually she is my second cousin, but who cares.

Several men are in the changing room of a golf club. A mobile phone on a bench rings and a man engages the hands free speaker-function and began to talk.

Everyone else in the room stops to listen.

WOMAN: "I also stopped by the Mercedes dealership and saw the new 2005 models. I saw one I really liked."

MAN: "OK, but for that price I want it with all the options."

The man hangs up. The other men in the changing room are staring at him in astonishment, mouths agape.....

He smiles and asks:

"Anyone knows whose phone is this?"

By Springy - August 28, 2006
Right, bank holiday Monday today, so yeah, I get an extra day off.. WOOHOO.. but I didn't do anything exciting, only just relax the whole weekend and chilled.. lol pretty boring actually. So, 6 weeks have passed on my summer internship. Only have 4 more weeks left. So how has it been. Well, pretty boring I have to say, not the most exciting job in the world to do. Mostly just sitting at a desk and writing code... lol.. but yeah only 4 weeks left, well less than that and then I will be back to uni again... WOOHOO

Oh ya, I have 5 tickets to go and see the View play live at King's College London. So if anyone wants to go and see, email me or just leave me a msn or something ok. It is for the 18th October, so you lot have plently of time to decide if you want to come or not.

Right thats about it. I can't be bothered to update anymore, since one, I am in no mood to really write anything, and I also have writers block, so yeah.. I'll cya later.. lol
Post a Comment
Read more

By Springy - August 20, 2006
A girl last week texted in last week competition to a radio station to win ticket to see the, erm I forgot now, I think it was a rolling stones concert or something. The radio station is XFM (have to say the best radio station out there) and what you have to do to win this competition is text a friend with the message beginning with, "I've just heard a rumour about you - guess what it is." So this girl called, Lizzie from London tooting text her ice skating teacher and her ice skating teacher replied, "I should have told you before, you are old enough to know now. It was a stupid mistake but looking at you now I have no regrets." Lizzie then phoned her ice skating teacher, Cotrina to get the whole story. What turned out as a simple text to win a competition changed into Cotrina admitted to be the mother of Lizzie and she had to put her up for adoption because Cotrina was bought up from a Catholic Italian family. Lizzie won the competition, as expected.. lol... but what a fantastic story, too bad it isn't true..

On Friday last week, Lizzie admitted it was a con. Maybe the reason why she admitted it was that the national paper decided to print this extraordinary story, and I think some international papers started to print it as well. It is such a good con. She conned the whole country to win some sold out concert tickets.. lol.. she even conned me.. I was so convinced of this story.. lol..

Oh ya, me seeing low planes flying aggressively (posted in my last entry), well I can say that now I don't see them anymore.. so yah!! Good for all of us. lol..

Erm, I can't think of anymore to write, but I leave you with some interesting maths question that you can do. LOL.. hope it doesn't test you too much.. 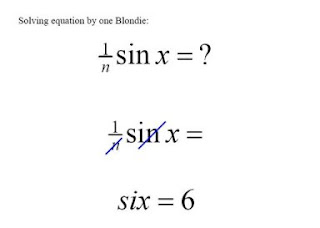 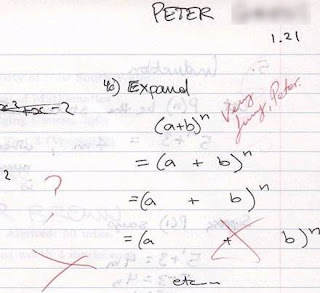 Anyway, enough of my weirdness since it is even scaring me a bit.. erm back to normal, I am still at Detica working away, still finding it ok ish.. yeah working is always going to be dull and boring, but that is always gonna be the case. Like what one of my cousin said to me the other day, which is so true, "jobs are never really fun unless u make it fun". LOL.. but yeah, I have only 6 weeks left of it.. then back to uni!! WOOHOO

Actually I am looking forward to return to uni.. I am gonna miss it when I graduate.. lol.. since then I have to get a job and pay my way out of things, instead of relying on the student loan... oh well life moves on doesn't it...

Funny stuff I read this week. Two things to do with Malaysia actually.. The pussy cat dolls are getting fined 10000RM (around £1300) for throwing a concert that contains too much sexual content.. LOL.. Don't Malaysian do their research? Do they actually listen to the lyrics to their song and look at how they perform on stage? Seriously messed up country man! I am sure they knew what they were getting themselves into when they allowed the pussy cat dolls (PCD for short) to perform in Malaysia, but still they let it happen and when they find out it was a mistake, they blame PCD... lol so stupid.. and the second thing was that a gang in Malaysia tried to rob a bank by nicking a cash machine. But what they ended up nicking was the cheque machine. So basically they went through all that effort to steal the machine only to find themselves nicking the wrong thing, which is completely useless to them. Something we can learn from this, Malaysian are stupid when it comes to robbery.. well this gang is.. lol..

Well I have exhausted my resource of what to say, so I end it here.
Post a Comment
Read more
More posts