By Springy - June 09, 2006
So, today is the start of the greatest sport competition on earth, where over 30 billion viewers will be watching the whole contest. Today is the start where boys become men, where any other event becomes eclipsed. Yes today is the start of the world cup, in Germany. Of course, I am bias, and I hope In-Ger-Land (the way we pronounce England when the footie (In America, it is soccer) team plays) will win, and yeah, we do stand a great chance in winning this yeah competition. Do I think we can win it? Yes, of course we can, any team from 6 can win it this year, but at the end of the day it all comes down to luck. Anyway, enough of football, we can talk more about that when the competition starts, lets move on to some of the things that I have done this week 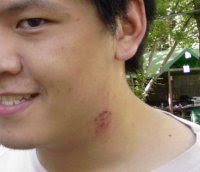 Last Saturday, I think it was the 3rd June, I went with a lot of people to celebrate Alan and Antony 21st birthday. We all went paintballing. When we got there, we got split into two teams, one blue and one gold. I was in the blue team, and of course we won. HEHE... But I got the worse battle scars. I got shot in the neck, where bare flesh was exposed, and if you look at the photo on the right, you can clearly see the damage that occurred. It has basically cleared up now, but I am proud that I had the worse injury of the day, out of everyone including the other people who were there that wasn't in our group.

Then yesterday, I played some football in hyde park, and oh my god, I can't believe how unfit I am. I can barely run like 100 metres before feeling completely exhausted. LOL... need to get more fitter man. Also, my passing as well isn't up to scratch and also lost a lot of power in my shooting as well. Oh well, haven't played football in like 2-3 years, not surprising. Oh well... and also, my hayfever is so bad man. So stupid British weather. Oh well, just have to cope a little bit longer than. Oh well, I am going to go now, nothing more to right, so I say goodbye. BYE!!