By Springy - June 21, 2006
It's Coming Home, It's Coming Home, Football's coming home.. well just not yet.. hehe... taken from the famous Beadle and Skinner track, probably England's best footie song of all time, but will it come true, will football actually be coming home? Before I move on to the world cup, lets elaborate more on pass world cup songs and also the current one. World cup songs for England has been, well putting it bluntly, just purely awful. The only one which has been able to live up to a footie anthem is Beadle and Skinner track, which was originally a Euro 96 song, not the World Cup 1998 song that is usually associated to. Even now, a great band like Embrace who made the current World Cup Song, World at your feet is simply lacking in quality. Why can't any people out there make a good football song. Well, it comes down passion. I haven't been to a footie match, but you go to one and you will hear pure genius songs and lyrics that will make your heart skip a beat. For example, a Peter Crouch song, he is big, he is red, his feet stick out of the bed, is just pure genius. So what am I getting at, actually I have no idea what the hell I am writing about now, but I think I am coming to a conclusion that in order to make a good footie song, you do not have to be great singers, have no musical talent, must be a die hard footie fan, and maybe being drunk wouldn't hurt; just take for example the great Beadle and Skinner (Ok, over used now, sorry). Comedians doing a TV show called Fantasy Football (have to say, was an amazing show, too bad it got axe) and everyone knew that they are football fanatics, have no musical talents, and yeah drunks as well; and over night transformed into music hero's... anyway.. enough of this, back to the world cup.

Well, we are nearly pass the group stages, oh yeah before I go on, I think I better warn you that this post is mostly to do with football, so if you hate football, look away now... Ok, back to what I was on about, we are nearly passed the group stages of the world cup, and our belated team, England has made it to round 2 of the competition. WOOHOO... It's Coming Home, It's Coming Home, Football's Coming Home... ehem.. right, and we now face the mighty Ecuador, who on their way to qualifying for the world cup beat the likes of Brazil and Argentina, bar having played at home which is like ten thousands metres above sea level, are a team we got to look out for. Eh? are you reading this correctly, yes you are, we have to fear them. Look at the way we played against Paraguay, which is a team we beat only 1-0 with an own goal, who are of similar football team as Ecuador as they both play in high altitude. We didn't play well against Paraguay, and at times, Paraguay actually deserved the draw. The problem we have is that we don't play with width, we don't pass and move, play in triangles, do not hassle the teams.. I could go on and on, and also, the stupid manager, Sven what's his face tactics are just diabolical. Playing arguably the best Midfielder in the world at attacking in the holding position? What is this guy on. If I had the chance to pick a team, the team I would pick is below. (Ok, this is considering the injury to Owen and Neville) 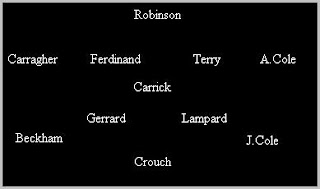 Now it gets complicated. Bare with me, but I just need to do this for my sake and my sanity. Look at this, it is a 4-5-1 formation, which a lot of the teams are playing at the world cup and has been working. But it is also a 4-3-3 formation as well. How? Well, when you haven't got the ball, you will move into a 4-5-1 formation where you flood the midfield and try to win the ball back in the middle of the park, and when you have the ball, or more accurately you are attacking, you switch to a 4-3-3 system, ala Chelsea, which will give you more attacking success. It also gives you width, since you have the two wingers, and also give support to the lone strikers via gerrard and lampard. It also gives protection to the back 4 without hampering Gerrard or Lampard. Now here comes the genius bit. In order to win the world cup, you must let Gerrard Roam around the park. Because of the flexibility of gerrard, and the way this formation is set out, he can also be a second striker. Also if he needs to can go and play on the right and left wing, which he can do because beckham and J. Cole can play in the middle of the park. This is what he does for liverpool, and it works, with him scoring 23 goals last season. Gerrard is the success of the team, not Rooney (he isn't fit), not fat Lampard who shoots all the time (did you know lampard leads the way as the player who has shot at goal the most time, having a total shot count of 18, with no goals). I think we need to play this way, at least have this formation in order for England to play at their best. Wow, that was technical, it's ok, I won't talk anymore on this anymore.. lol.

Wow, I have written a lot today, all on world cup... lol.. yeah I am a footie fan and I think if I am not mistaken watched every game... no I think I missed one or two, but yeah.. lol.. I actually don't have a clue who is going to win the world cup this year, maybe Argentina, but I don't have a feeling they will. I predicted Czech republic before the world cup, but not too sure now. Anyway, going now to see Argentina play Holland in their last group match. There might be mistakes above, but I will correct later.. I am sorry that I have written all about football, next time I will pick another topic to write on.