About Me
Name - Richard Tan
What are you doing at the moment? - Working in a investment bank as a self employed contractor. In Information Technology

Why was it created?
Well, thanks to my friends who hassled me to produce a web page, this was created... lol. Actually it is quite nice to have this so when I am old and nearly dying, I can come back and read up on things that I have done.

What experience do you have in web designing?
Started to design pages in Year 7, I think that was in 1997 or 1998 lol. Can't remember. Inspired by my cousin in Australia, who I actually haven't seen in person... lol. But to be honest, my knowledge in web designing is quite poo compared to people who I know. But at least this site, version 2 is now XHTML 1.1 and CSS 1.0/2.0 valid... was hard at first, but it got easier when I got use to the way to program

History of the site
Below you will be able to see a picture of my first site which. The picture shows what the front page looked like. This was a very simple design and it didn't take me very long in which to create. It featured no flashy stuff and sooner or later it needed updating. 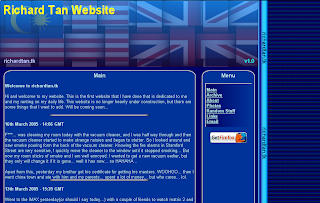 The below images show my second version of my website. This had two colour schemes and it allowed you to pick which one you wanted. It also featured a shoutbox which at first was not created by me, but eventually was. It had things that were built on later during the life of it of example RSS and a media music player. 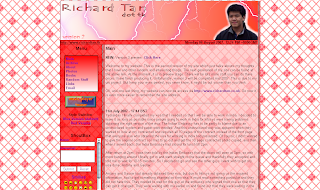 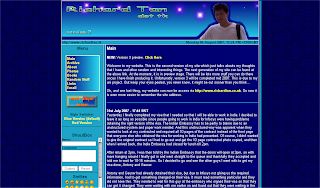 Below is the third incarnation of my site. It was fully editable and did not involve typing html stuff to actually upto the website. I did this version just before I went to India and even though I love the site and what I done to get it to what it was, I just didn't have time to actually code it and maintain it. I wish I could have made it really funky and graphically appealing... Therefore in the end it was buggy and not very good, hence the http://localhost/v3a/index.php error what everyone keeps getting.. HAHAHA 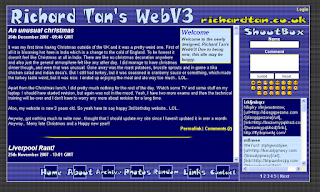